A downloadable game for Windows

Timekeep is a puzzle platformer that lets you create wormholes through time.

For centuries, the royal family of Elaine kept secret their knowledge of time travel.

Their practices were shared only with their children and a classroom of orphans they elected to take in.

Eventually, the family's reticence led the church to brand them as witches.

The entirety of the Elaine Estate was engulfed in flames in a single night.

The children narrowly escaped their demise, the only survivors being those gifted golden pocketwatches.

Years later, the King's only daughter by blood returns to the castle, seeking to reunite with her closest friend.

You play as Mina, a rabbit revisiting her home years after its destruction in search of her alligator friend Secil. With the ability to temporarily bend time in small areas, you can overcome hazards and discover treasure spread throughout the dilapidated castle.

Use WASD + Space to move around, left click to create wormholes and right click to clear them.

There are a total of FIVE levels, after which you return to the title screen.

CREDITS:
Artist: CameraCore (@CameraCore)
Level Designer: Flatflyer (@FlatflyerDev)
Programmer: rubic (@paradoxrevolver)
Music: SadColor (@fukouiro)
Special thanks to: My brother for giving us the game title within 25 seconds of seeing the game, just like he promised. He only uses Twitch so here's that.

Our team had a lot to add to this game but there's only so much we could get done in a week. Partial work already exists for level selection, story cutscenes, sound effects, several new game elements and, of course, new levels. The results and feedback we get from Brackey's Game Jam 2020.2 will definitely help us decide whether or not we want to continue working on Timekeep!

cute short lil game, although its not some polished masterpeice

Having grown up on console games since...well EVER, I'm always leery about playing 2D platformers via a mouse/keyboard. Often I find them to be kind of clunky feeling, And I find myself feeling very unconfident in my controls. Having said that, this game is probably one of the best keyboard platformers I have ever played. The control in this game is super tight and super smooth. I am able to navigate using the WASD keys and the mouse with no issue whatsoever! I don't ever feel like the game is just out of my control, nor do I feel cramped or uneasy. Just excellent control design. And of course the main mechanic too, wow. I adore the time mechanic in the game! Setting up small chunks of the level to help solve puzzles is brilliant. It really itches that part of my brain that loves these kinds of puzzle platformers. The presentation and style are fantastic too. I love the little things, like the adorable hop the protagonist does when moving. And their bright red/white color scheme that makes them stand out from the environment. And I love the contrast between the restored sections of the level and the ruined sections. An excellent game for sure!

Nice game, really unique. I like the swaying animation, lol. Keep up the good work : ).

I really enjoyed playing! The time-based elements were really well worked in, and for such a short game I thought really well explored. Each level felt very unique and I thought had a new thing to try with the mechanic (one level will have a lever hiding in the past, while another has you being very skimpy with your time blocks so you  don't run out too fast) I picked up pretty quickly that the ruins would leave you hints of the older layout where stairs and rooms used to be, which really added a nice touch. My only complaint is that I want more! Really hoping more comes out of this game!

I spend an enjoyable time on that one! You have a good gameplay mechanic with a lot of potential here, clearly something you can built on (forgive me  for any mispellings, english isn't my first language). It's a puzzle game so i think it's ok to make the player backtrack (since searching is basically a big part of that type of game) as long as you include visual clues to help him/her. Something like your staircase's ruins that suggest a brand new staircase in the past is a good exemple of that. My only concern is that the main character lacks a "coyote jump". It's not a fault to have a rigid character in a puzzle game but if you ask the player to go through short timing platforming phases then working on your main character's response to the player's command is i think a neccessity. Apart from that, i think all of you did a wonderful job and should at least consider building more on this short demo. Congratz to all!

I don't like the 4th level. It feels off from the rest in how dangerous and how precise the platforming is. Further, it feels like it's designed to make the player have to backtrack, which is irritating. The 5th level feels that way a bit too, but it's not a problem to backtrack for a bonus item, in my opinion. However, the 5th level also feels out of place in a different way: it feels like it would've needed more levels leading up to it. The solution for dealing with the pit of spikes requires more comfort with the mechanics than I would expect the player to have at that point. If you do choice to continue working on this, I would recommend both of those levels being moved to later in the game. I would also recommend introducing spikes in a smaller way.

Those two levels sit in contrast to the first 3, I think. The initial tutorial is excellent, though I may have missed any mention of which button is jump. The bigger thing missing, I think, is a way of learning and getting a feel for how the rate the time power goes down is determined. I had the impression at first that it was always the same, then only later noticed that it seemed to be different sometimes.

Overall, I hope you do finish the game at some point. I think pixel art games are never a bad thing, and I think there's a lacking of platformers with cute bunnies and interesting takes on the mechanics.

it is a very fun and original game 👍 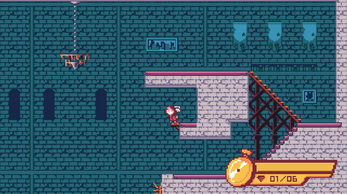 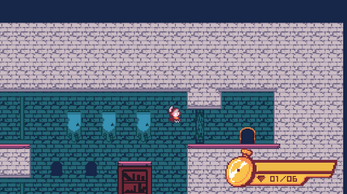 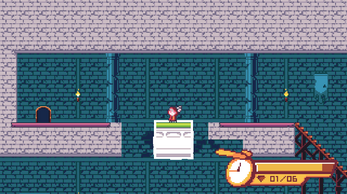